Colourslide (I Wouldn't Start From Here) 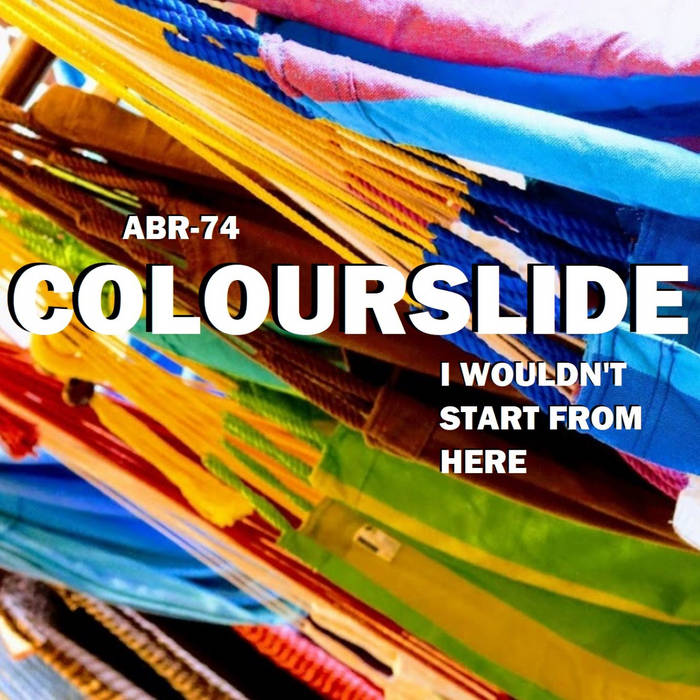 Here it is, it is your highlight of the week. We are back with yet another taster collection of independent artists from all around the world. You know the drill, it's the usual eclectic assortment of styles, genres and approaches. It is simply amazing how much talent and genius that flies under the radar. One thing is for sure... you will enjoy these twenty songs far more than you will enjoy any Top 20. Fact.

As always, we welcome back a few familiar faces. There is the Ohio-based neo-rockabilly of The Kookie Kutterz and the blues-inclined punk of The Cycle Paths. We also reintroduce the AB fanbase to the masterful Phil Sorrell. Phil is the producer and creative genius behind Caretaker Studios and he contributes one of his solo electro takes.

The (sub)title track of this collection comes from Barry McCormack, a supremely talented neo-folk rock musician with a knack for musical experimentation. Two exclusives are included in the track listing too. Eric-Jan Vriend, who we collaborated with on our Christmas album last December, returns to showcase an indie folk track from his current project, Saint Polaroid, and Shawn Smith presents an exclusive cut from his upcoming album of traditional songs from Indianapolis.

Special mention also has to go to Romanian band, Axis, who deliver an expansive bluesy psychedelic soundscape that would make Jimi Hendrix proud. Also to Sweet Radish who delivers a lovingly crafted bluegrass tribute to his late father.

There are loads more new faces to introduce you all to as well. We have Cosmic rootsy rock from Ride Til Dawn, British alternative rock perfection from The Joe Clements Band, and melodic 60-tinged pop from DC Cardwell. Then there is the ska punk of Dizzy Box Nine, the alternative country of The Carney Brothers, and the country-inclined folk rock of Harry Kimball. Casey Noel delivers us some good ole country and western, Super Genius brings us progressive folk rock, and Josh & The Jet Noise gift us some straight-up alternative rock.

Proceedings begin to wind down with the spiritual country folk rock of Allie Crummy and the contemporary folk of Robin Mukherjee. Joe Mansman & The Midnight Revival Band play us out with an earthy blues rock epic.